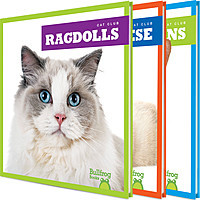 Meow! Discover the characteristics and physical features of your favorite cat breeds. Each book highlights the breed’s features with a labeled diagram, and a picture glossary reinforces new vocabulary. Bright, full-color photographs and photo labels complement the carefully leveled text to make reading for understanding easy and fun. Includes reading tips for teachers and parents, a table of contents, and an index.

The visual appeal of cats comes through in these breed introductions. They are not meant to be care guides; instead they touch upon the most prominent features of each breed, such as fur, size, and coloring. The simple, enthusiastic text identifies general physical characteristics: “This is a Maine coon! These cats are big.” General behavior traits are also noted. For example, “[Birmans] love to play!” Highly engaging photographs capture each breed’s charm, depicting varieties of colors and markings, different ages, and a mix of still and action views. Most include at least one kitten photo; all show children with different skin tones interacting with cats as pets. Each book closes by asking readers if they would like to own the featured cat. VERDICT ­Popular pets depicted with strong visuals and just a bit of information.