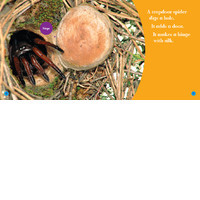 From the Series An Eye on Spiders

In Trapdoor Spiders, young readers will learn about the physical features and characteristics of Trapdoor spiders. Vibrant, full-color photos and carefully leveled text will engage beginning readers as they learn about this type of spider.

A labeled range map highlights where these spiders can be found around the world, while a picture glossary reinforces new vocabulary. Children can learn more about trapdoor spiders online using our safe search engine that provides relevant, age-appropriate websites. Trapdoor Spiders also features reading tips for teachers and parents, a table of contents, and an index.

Trapdoor Spiders is part of the An Eye on Spiders series from Jump!

If there’s one fear that gets instilled in us early, it’s of spiders. But even though the An Eye on Spiders series picks some of the most feared arachnids to introduce (tarantulas, anyone?), it sticks to basic biological facts and avoids any outright frightening features. The female star of Black Widows is notable for the venom she injects into her prey, her aggressive mating habits (where her name comes from), and her black-and-red markings—her poor male counterpart is a drab brown. By contrast, the arachnid pictured in Jumping Spiders is downright adorable; this little spider jumps long distances instead of spinning a web and keeps its eggs protected in silk. The dreaded subject of Tarantulas comes in 900 hairy species, some in bright, fascinating colors like blue and pink. Clever hunting habits are on display in Trapdoor Spiders; in an impressive feat of animal engineering, this spider digs a hole, adds a door, makes a hinge with silk, and waits for prey to walk by. Photo-illustrated and with simple, repetitive text, these volumes contain tools to support emergin readers. An image glossary for in-text vocab words and habitat map help readers contextualize, while a parent-and-teacher section at the start will assist in guided reading. These books are bold introductioins to species variation and early language comprehension.

Eye-catching photographs and easy-to-read text highlight these eight-legged creatures. A description of the spider capturing prey opens each book, followed by facts about physical features, habitats, and a couple of key behaviors. The language will be accessible to early readers, with short, direct sentences and mostly simple vocabulary used throughout the series. Questions are posed to readers, and then answered, adding some variety to the narrative flow. Well-chosen photographs provide vivid examples of the basic information. A full view of a garden spider’s web, for example, is followed by an excellent close-up of the spider’s claws on a single strand, with scenes of captured insects shown on subsequent page turns. Images consistently support the content, providing useful depictions of spiderlings, body parts, and more. VERDICT Strong visuals and age-appropriate text make this a first choice for younger readers. 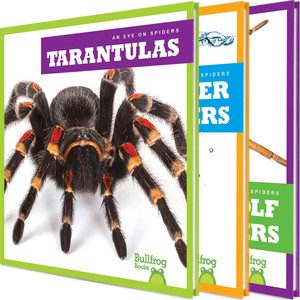 An Eye on Spiders