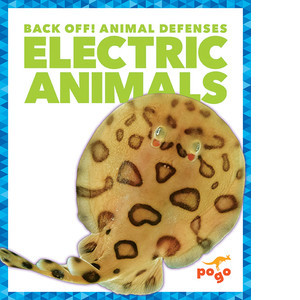 These introductions to animal defense behaviors feature brief examples from a variety of species. Typically six to eight creatures are shown in each title, though Electric Animals examines only three. Descriptions of defense behaviors generally stick to how animals use them, rather than physiological details. In most cases, readers learn the basics of how each animal defends itself, although in a couple instances, the impact of the feature is overstated. For example, in Venomous Animals, the author states that “one bite [from cobra] and the mongoose would be history,” but mongooses actually have pretty strong resistance to cobra venom. Photographs are clear, and most are full page or larger, but their impact and usefulness vary. Images showing predator and prey interacting are most effective, but these are rare. More typical photos depict the animal on its own, often without showing the defense feature effectively. The lack of animal interaction is especially noticeable when the text shifts to present-tense descriptions of action scenes that aren’t well represented visually. For instance, in Horned Animals, the dramatic meeting between a mountain goat and an eagle is accompanied by a photo of a mountain goat just standing on a hill. VERDICT Serviceable introductions for young readers, with some flaws.