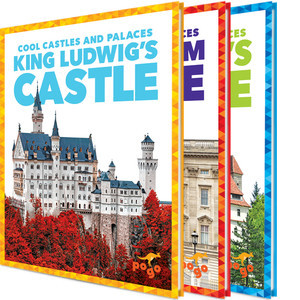 Readers are given keys to some of the world’s most lavish and secretive abodes when they pick up the Cool Castles and Palaces series. Each book focuses on one royal dwelling, offering a snapshot of its history, inhabitants, layout, function today, and, of course, copious photos. Inviting layouts utilize large illustrations (either photographs or a simple diagram of a floor plan or estate grounds), descriptive captions, and a paragraph or two of large-sized text, placed against a colorful background. Buckingham Palace bears the distinction of still being used by British royals today, and kids will marvel at its 775 rooms (including 78 bathrooms!) and a cleverly hidden door. Using a senstaional opening, Dracula’s Castle quickly debunks the vampiric reputation of Romania’s Bran Castle but notes how it inspired Dracula author Bram Stoker’s description of his fictional Count’s home. Readers return to Imperial China in Forbidden City, which explains different parts of this palace complex. Another sprawling estate is detailed in Palace of Versailles, though the text acknowledges how France’s poor weren’t fans of its extravagance. Each volume is divided into three chapters and concludes with at-a-glance facts and geographic map. Textual repetition and bolded glossary terms help support independent reading–guided reading tips and activities are also available to educators–resulting in a well-structured but fun entry into non-fiction.